Varicose veins are the dilation of superficial veins which is accompanied by malfunction of valves and blood flow. This disease is expressed as an increase in size, change of form and decrease of elasticity of veins. More often, veins of the lower extremities are affected. The dilated veins trans-illuminate (becomes visible) through the skin as nodes. The speed of blood flow in the dilated veins is decreased, which often leads to the formation of thrombi in them. The violation of blood supply to the skin can lead to the development of trophic ulcers. Varices appear because of violations of blood circulation.

The reasons are multifactorial: constipation, improper treatment, inadequate physical exercises, smoking, wearing of tight-fitting shoes for a long period of time. Pregnancy can be a cause of varicose diseases of veins because of increased pressure in the pelvic region and abdominal cavity, the return of blood from the lower extremities to the heart is slowed down. Obesity also leads to the dilation of veins. The first sign of the dilation of veins is the appearance of nodes on the wall, along the length of the venous vessels.

Spasms of the muscles and the feeling of fatigue in the legs below the knee could accompany such a manifestation. Blood accumulates in the veins of lower parts of the leg; hence, dark-brown or dirty white patches appear on the skin. Violation of blood supply could lead to varicose eczema or trophic ulcers. Varicose veins can lead to esthetic problems in its early stages and deteriorates the quality of life in its later stages.

According to the international classification of diseases CEAP, varicose diseases have six stages:
1) Spider nevus
2) Dilation of veins up to 3mm
3) Diameter of vessels from 3-6mm as well as edema of the legs
4) Dark coloration of the legs
5) Open trophic ulcers
6) Persistent trophic ulcers

In our clinic, we treat all the stages of varicose diseases. Both consultations and treatment are executed by doctors who possess an experience in the treatment of vascular pathologies of over 20 years. Patients can as well undergo both laboratory investigations and ultrasound diagnostic investigation (US) of the vessels. 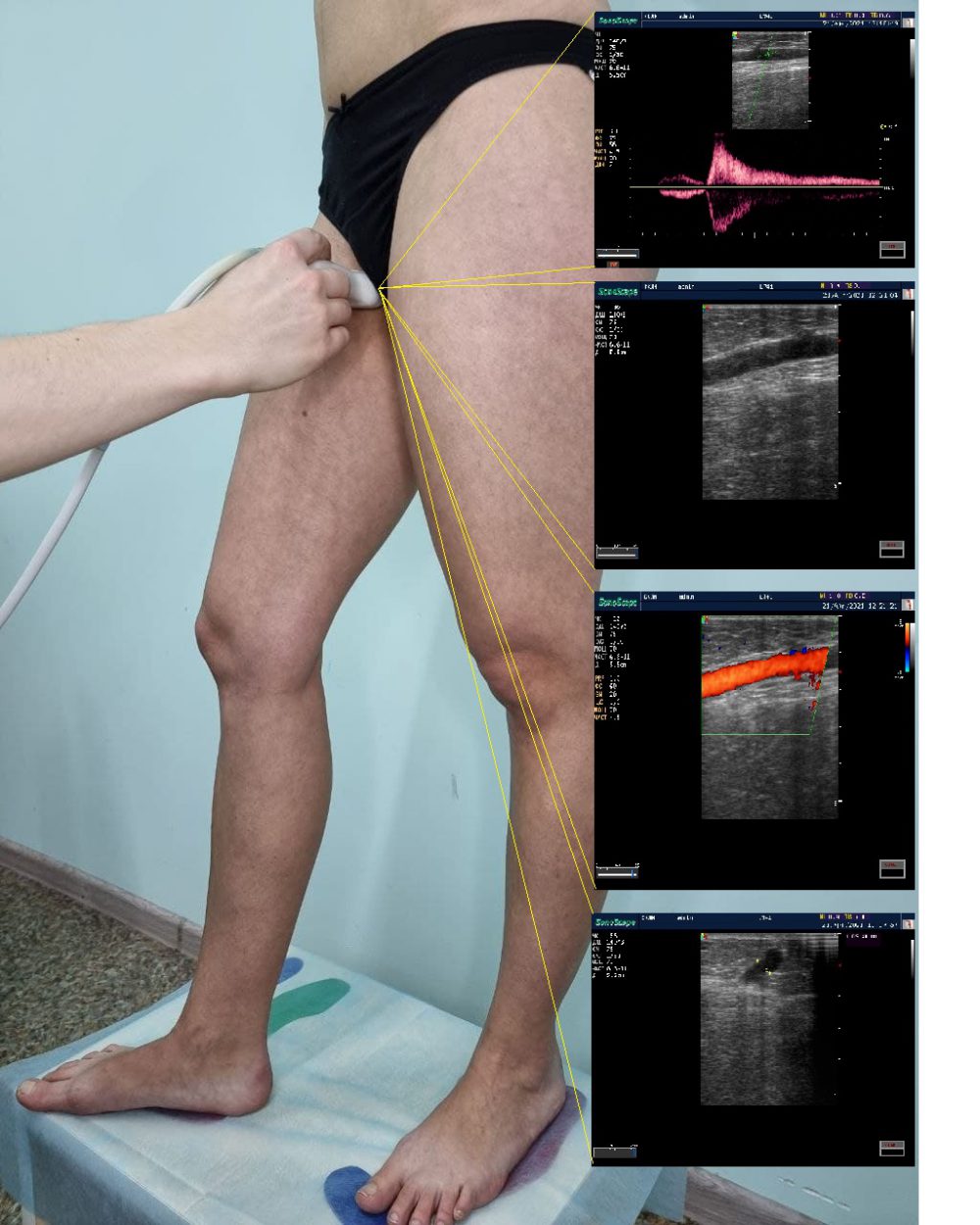 For the treatment of spider nevus and small caliber reticular veins, Neodymium laser “Photona” is used. “Photona” is the world leader in the treatment of blood vessels. You will be offered the same treatment option in Paris, Rio de Janeiro and Moscow. External coagulation of veins is also being carried out. After treatment, visible spots of the laser influence are seen along the veins, which later independently disappear within 2 – 3 weeks without any trace.

In our clinic, Neodymium lasers and sclerotherapy as well as when combined are used for the treatment of second (2nd) stage varices. In applying sclerotherapy, we use the british medication “Fibrovein” which is registered in Ukraine.

For the treatment of third (3rd) stage varices when the diameter of the blood vessels reaches or exceeds 3mm, we use combined treatment methods in our clinic: sclerotherapy, external coagulation of veins as well as endovenous coagulation of veins (ECV). During such a procedure, the veins are not destroyed but rather its patches. The advantages of using ECV lies in its better cosmetic effect, smooth recovery in the post-operative period, hence the patient can quickly.